We are fortunate, thanks to the generosity of our sponsors and the funds we have raised, to be able to offer the Belsize Baroque Leader Scholarship scheme.  It is an important part of our aim to give young professional players specialising in historically-informed performance the chance to lead an orchestra, work with a wide range of musicians who include committed amateurs, and get added experience of solo performance under our range of directors.

Our award-winners have commented that they feel this gives them significant experience ourside their specialist musical training, and that they value the ‘family’ atmosphere of an orchestra comprised of a broad spectrum of skills and backgrounds.  From the orchestra’s viewpoint, we are fortunate to have such talented young musicians to work with.

Andrew Taheny is a violinist based in Manchester, originally from Glasgow.  He began playing baroque violin during his time at the University of Edinburgh, where he studied with Ruth Crouch and Hilary Michael.  Here, he was the recipient of the Early Music Bursary from the Friends of St. Cecilia’s Hall, as well as the Sir Thomas Beecham Scholarship for Performance, the Andrew Grant Bequest for Recital, and the Frederick Niecks Essay Prize for Dissertation.  Andrew’s dissertation explored performance practices in nineteenth-century string playing and the modern performer’s relationship with musical Romanticism.

Whilst a student at Edinburgh, Andrew also studied with the Parley of Instruments at the Cambridge Early Music Summer School, and performed in masterclasses with Judy Tarling and Rachel Podger.  In consecutive years he was Leader and President of the Edinburgh University String Orchestra, and in 2019 he won the University Chamber Orchestra’s Concerto Competition, leading to a performance of the rarely-heard Finzi Violin Concerto.  He also performed with the Berlin Opera Academy Chamber Orchestra, and began working with the Nevis Ensemble, bringing orchestral music of various genres to communities across Scotland.

Andrew is currently studying with Julia Hanson and Pauline Nobes as a Masters student at the Royal Northern College of Music.  Since moving to Manchester, Andrew has performed professionally with Manchester Baroque and the Northern Chamber Orchestra. He has also led the RNCM Baroque Ensemble, and was recently selected to join the Cambridge Handel Opera Company’s Talent Development Scheme.  He regularly performs with Leeds Baroque, under the direction of Peter Holman.

Passionate about music education, Andrew is a Lead Ambassador for the Benedetti Foundation, and has worked with the West of Scotland Schools Orchestra Trust since 2018.  In 2021 he was invited to work as one of four Lead Musicians for Nevis Ensemble’s Glasgow Life Artist Residency, for which he contributed to the creation and delivery of a series of primary school composition workshops.

Andrew is delighted to have been awarded this year’s Belsize Baroque Leader Scholarship, and is very much looking forward to working closely with the ensemble and their directors on a range of exciting repertoire.

Rebecca Bell is a recent graduate of the Royal Academy of Music, where she received her Masters with Distinction, and was awarded a DipRAM Prize for outstanding performance in the final recital.  Rebecca enjoys a wide variety of work with both modern and baroque ensembles, which have included the Royal Northern Sinfonia and the LSO, and is thrilled to have recently successfully auditioned for work as an extra with the Hallé and the Gabrieli Consort.  She is regularly invited to guest lead ensembles at festivals and concert series across the UK, and very much enjoys the opportunities for creative input that this brings.  As an in-demand chamber musician, Rebecca performs regularly with her award winning quartet, The Bell Quartet, as well as being a founding member of The Nuevo Tango Quintet, with whom she has given sell out concerts across London, featured on BBC Radio 3’s ‘In Tune’ with Sean Rafferty, and performed in the final of the Royal Overseas League Competition in 2020.

Last year, Rebecca was awarded the prestigious Enlightenment Scholarship to continue her studies at the RAM, undertaking a Professional Diploma in baroque violin with Pavlo Beznosiuk and Rachel Podger.  In spite of the pandemic, she had the opportunity to participate in some exciting projects at the Academy, including the renowned Bach Cantata series, and was chosen to lead some of the projects and to perform obbligato parts in live-streamed performances alongside guest directors such as Rachel Podger and Laurence Cummings.  Rebecca is delighted to have been selected as this year’s Belsize Baroque Scholar, and is very excited to have the opportunity to work with the orchestra and its directors.

Outside of her musical endeavours, Rebecca enjoys crochet, vegan doughnuts and life by the sea in Brighton where she lives with her partner Rhys and young daughter Rosalie.

Since working with Belsize Baroque, Marguerite Wassermann has moved to Basel, Switzerland for further study of baroque violin and historical improvisation with Amandine Beyer and a minor in Medieval to Renaissance studies.  This year, she has enjoyed touring across Western Europe with a classical programme led by cellist Ophélie Galliard and looks forward to upcoming performances and tours with Jordi Savall’s Concert des Nations.  She returns to the UK frequently as she is part of the Orchestra of the Age of Enlightenment’s Experience Programme.

Previous recipient of Belsize Leadership Bursary, violinist Ada Maria Witczyk was born in Poland and was awarded Belsize Baroque Scholarship to lead the orchestra during 2017/2018 season.

Ada made her solo orchestral debut at the age of eleven with the Odeon Orchestra.  Since then she has performed in such venues as Buckingham Palace, the Royal Festival Hall, Barbican Centre, St Martin-in-the-Fields, Cadogan Hall and Palazzo Pallavicini-Rospigliosi, amongst others.
She has taken part in concerts with Gabrieli Consort & Players, WOB, The English Concert and Florilegium.

She has won several prizes in international violin competitions, including first prize at the Baroque Competition in Gorzów Wielkopolski Honourable Mention at the Polish Forum of Young Instrumentalists, 3rd prize during The Rising Stars Grand Prix — International Music Competition in Berlin.

Ada completed her Bachelor’s degree at the Royal College of Music, studying violin with Itzhak Rashkovsky and Michal Cwizewicz and Baroque violin with Catherine Martin.  Thanks to an Anthony Edward Brookes Award Ada is currently in her second year of a Master’s degree at the Royal Academy of Music studying with Levon Chilingirian and Simon Standage.

I was awarded the Belsize Leader Scholarship and performed with the orchestra during the 2016–2018 seasons for which I’m very grateful.

Since then I have had the great pleasure of recording Rodelinda with the English Concert (2021 Linn Records) and Mozart Concertos with Robert Levin and Academy of Ancient Music (2022 Decca).

Recent highlights include solo performances of J.C. Bach’s Sinfonia Concertante with Simon Standage at the English Haydn Festival (2022), leader of Ensemble OrQuesta during the 2019 Grimeborn Opera Festival, London Handel Festival with AAM and BBC Proms with the English Concert amongst others.

Trying to find new ways to engage younger audiences, I began recording filmed productions showcasing the expressive power of the baroque violin, starting with Biber’s Rosary Sonata No.1 ‘Annunciation’ in 2019.  That recording also appeared on Argentina Classic National Radio and Radio Soest in the Netherlands.

To inspire composers during the 2020 pandemic I launched the first instalment of the Ruzickova Composition Competition receiving entries from countries around the globe.  In 2021 alone, we have inspired over 90 new pieces of music for period instruments turning 5 of them into short films: Yellow, Ostinato in 7, The Spectre, Come bianca luce and Song and Dance.

I’m proud to share that our competition is now officially a registered charity and winners of the 3rd instalment will be announced shortly.

For this and more please visit: www.adawitczyk.com

Alice Poppleton is enjoying a diverse freelance career combining her two loves: performance and community music.  After graduating from the Royal Academy of Music with distinction, Alice spent a formative year with Belsize Baroque (2018-19).  Fuelled by the enthusiasm and generosity of the group, Alice gained a great deal from this experience and is grateful for their ongoing support.  Alice now plays with leading period ensembles such as Gabrieli Consort & Players, La Nuova Musica, Music for Awhile, Instruments of Time and Truth, Canzona, London Early Opera Company, The Oxford Bach Soloists and The Hannover Band.  Alice is the Director of Thinking Music, an initiative she launched in 2020 to enrich the lives of children by connecting rural primary schools with universities to make music together.  Alice has recently enjoyed two ACE funded residencies to Snape Maltings with her music-drama group Hold The Drama.  Delivering non-verbal shows that use live music to start conversations around mental health, Alice has relished the opportunity to develop her physical theatre skills and delving into using music as the narrative language.  From traditional concert settings, to inclusive concerts at the Wigmore Hall, narrating children’s concerts and speaking on Radio 3 for The Orchestra of the Age of Enlightenment, presenting a children’s series for BREMF, to directing Thinking Music, Alice loves the rich tapestry of creative projects in her working life.

Belsize Baroque was a fantastic bridge between my time as a student and entering the early music scene, helping me feel connected and on track with my goal of becoming a professional musician.  During my time with this welcoming and supportive ensemble, I enjoyed exploring unfamiliar and challenging repertoire, further developing my leadership skills, and receiving guidance and coaching from the hugely inspiring guest leaders.

Kate Agostino is a modern and baroque violinist living and working in London.  After graduating with a Masters degree from the Royal College of Music, she was awarded the Belsize Baroque leadership scholarship, leading and directing the ensemble throughout its 2016 and 2017 concerts.  She currently performs with various ensembles, including Ensemble OrQuesta Baroque, The Bath Festival Orchestra, and the Klingen Choir & Cultural Association Chamber Orchestra, and has played in many recording sessions for Hollywood films such as Mission Impossible: Fallout and Black Widow.  Kate is also a passionate violin teacher and has a teaching studio in West London.

My time leading Belsize Baroque was a highlight in my career!  Not only did we perform exciting repertoire, but the other members of the orchestra were extremely kind and professional.  I couldn’t believe I was surrounded by so many people who were at the top of their fields of work — doctors, lawyers, engineers, etc., and yet all such wonderful musicians and a welcoming atmosphere at every rehearsal.  The scholarship gave me a great opportunity to develop my skills as a leader and performer.  Since leading Belsize Baroque, I have gone on to perform in many early music ensembles, record in studio sessions for Hollywood films, and teach violin to many wonderful students.  I am forever grateful to have been awarded the Leadership Scholarship and will always look back on my time with Belsize Baroque fondly. 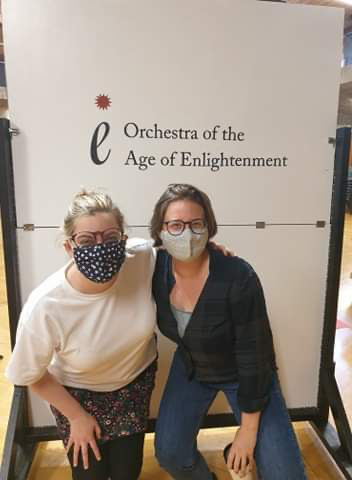 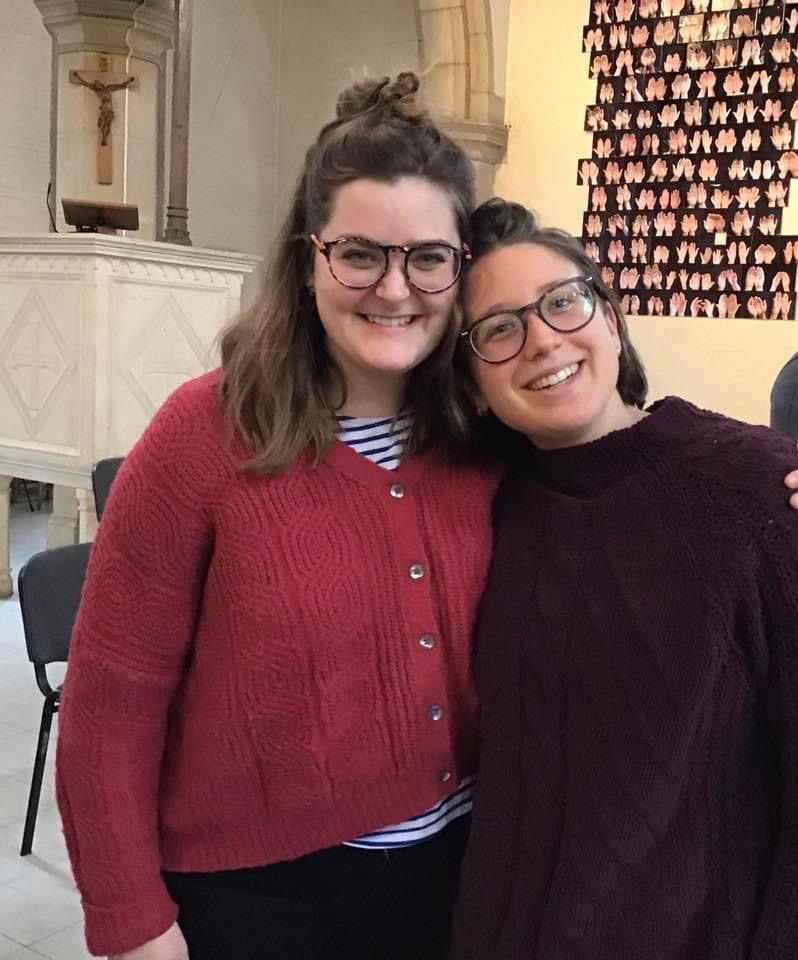 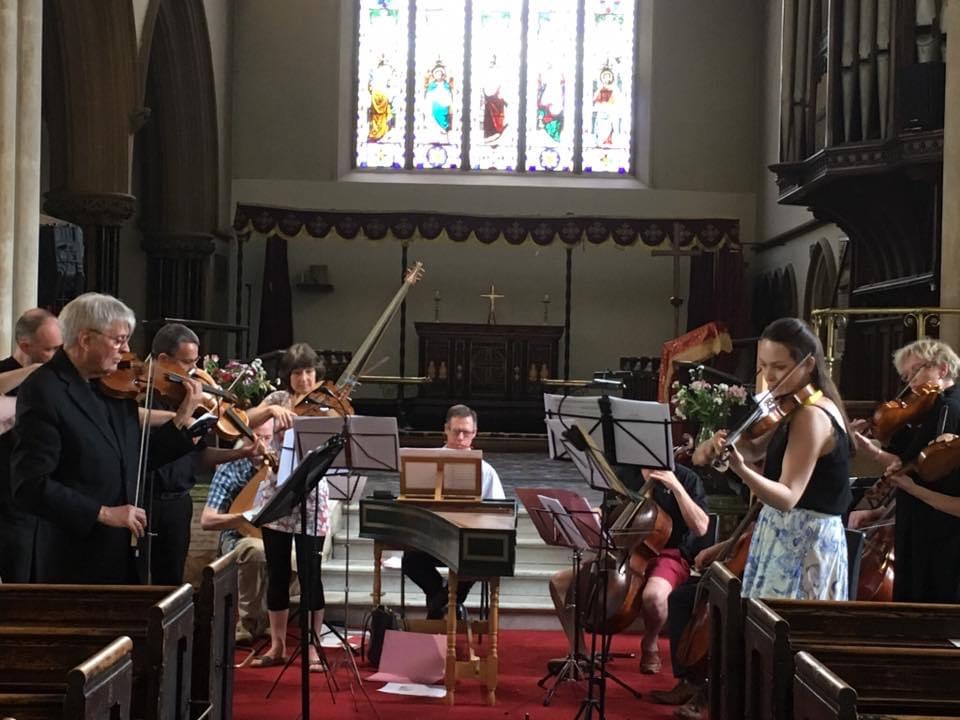 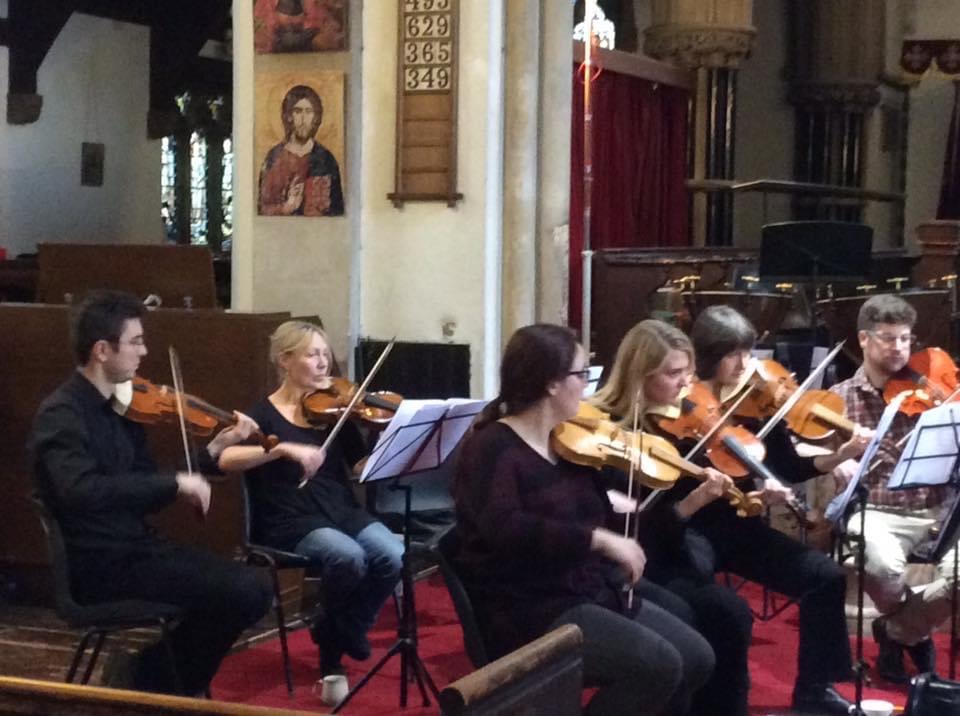 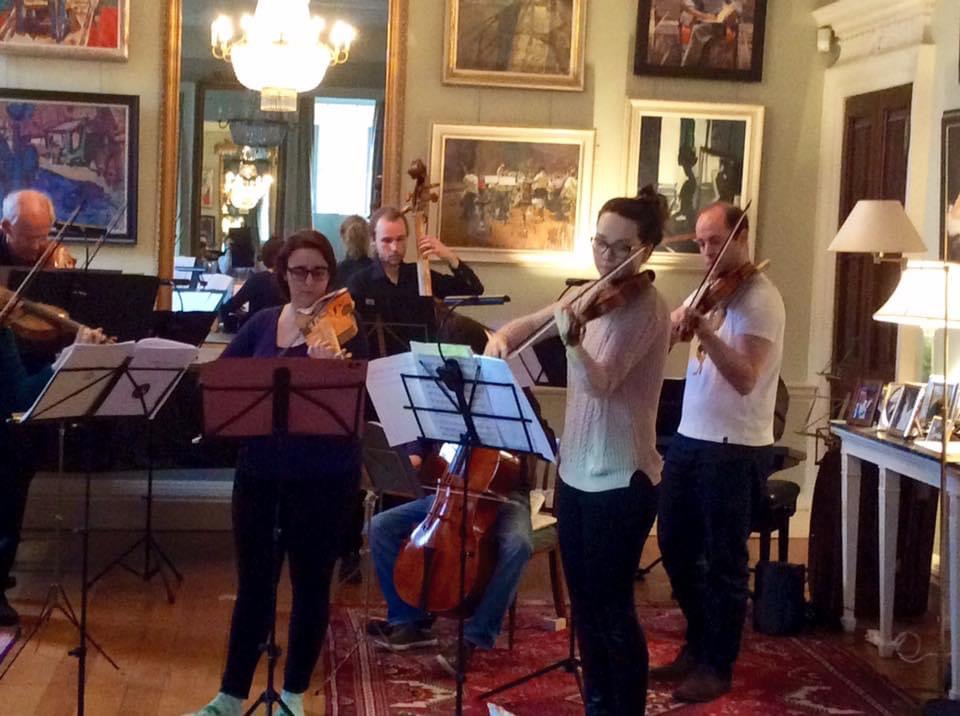 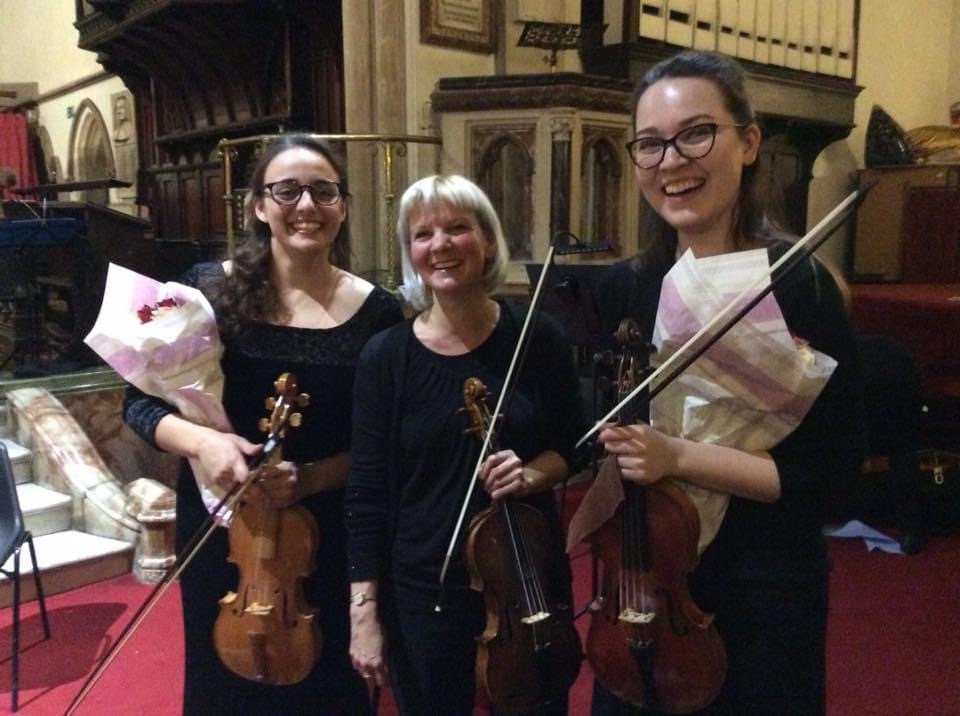 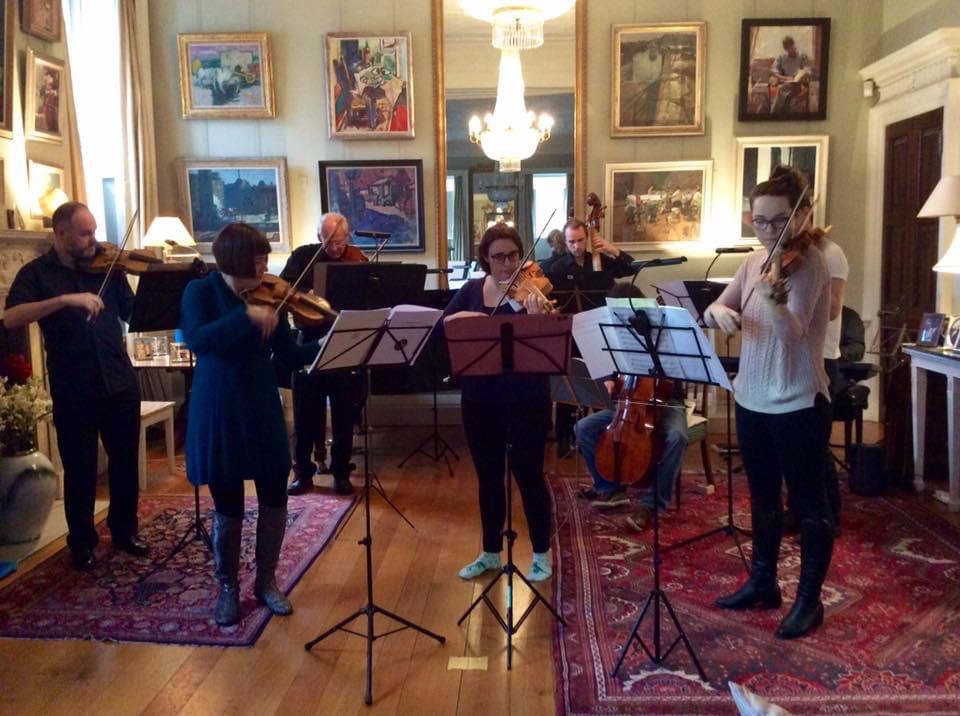